If you, like me, were using Sublime or another code editor and want to give Atom a chance, you are making the right choice. Follow the steps below and install it in a few minutes.

In short, to install Atom on Mac OS, go to atom.io, download the zip file, unzip it and then move it to Applications.

Here is how to install the shell commands atom, apm and some recommendations for the editor. 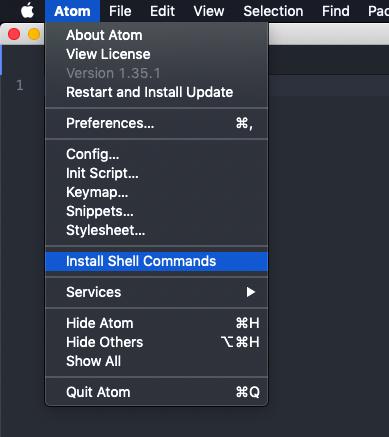 This command will install the binaries and provide the apm and atom commands.

There you have it, your Atom is installed.

The atom shell command is used to open files in the editor using the terminal. This is one of the commands I use the most on a daily basis. Let's say you are in the /htdocs/project folder. To open the whole directory, use:

To open only one file:

To simply open the editor without any file:

Atom Package Manager (apm) is used to manage atom packages and themes. See below for some of my useful package recommendations. Example of using the apm command:

I used the Sublime Text for approximately 4 years. First, version 2, then version 3. I have nothing to complain about it, and in fact I still use Sublime. But it is not my primary editor.

First I'm going to talk about the main negative point of Atom: It's a little slow to open, even on a Mac OS with a very good setup. This is mainly because it is developed in web technologies (Yes, HTML, CSS and JS through Electron). Performance is a negative point that has been addressed in recent releases, but that still doesn't stop me from having it as the main editor.

For very fast edits where I only open one file, give a Cmd + S and close, I still use Sublime Text without any packages installed, because the opening time is key in those cases. But for the daily work, I always use Atom, because it gave me more productivity.

Some of the main features that make me like Atom more than any other editor:

I personally use Atom for web frontend development, but regardless of your stack, here are some interesting packages:

Talking about themes, I use One Dark, both for UI and syntax, but you can install other themes via apm or the interface.